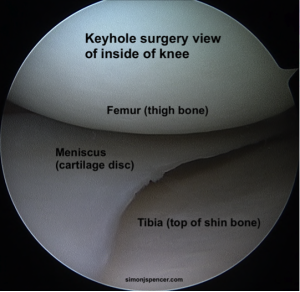 What is a meniscal repair?

Meniscal repair is a keyhole procedure in which a torn section of meniscus (the knee’s internal cartilage disc) is repaired / stitched back into place rather than being removed.

The meniscus is the main cushion or shock absorber with the knee and therefore it is desirable to repair rather then remove torn meniscus when possible.

The operation involves making two small wounds (incisions) in the front of the knee to gain access to the knee joint. A camera, (which is about the same thickness as a pen) is then used to look around the knee and identify the problem. Arthroscopic / keyhole instruments and stitches are then used to carry out the repair work inside the knee.

Only certain types of meniscal tears are amenable to being repaired. A number of factors are weighed up at the time of surgery before deciding upon repair or removal of the torn section of cartilage.

What are the risks associated with arthroscopic meniscal repair?

All surgical procedures carry some degree of risk as well as benefit. Generally the risk associated with knee keyhole surgery is very low. 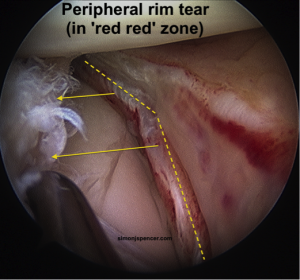 There is a small risk of infection associated with any operation; it is very low (say <1%) with knee arthroscopy procedures. Care is taken to try to minimise the risk of infection. There is a small risk of stiffness with surgery. There is a possibility at some point following surgery that the section that has been repaired may sustain a further tear. While this is not common, it can occur and in those cases further surgery may be required to remove the torn section. Occasionally a further repair may be a possibility. What should I expect following my arthroscopic meniscal repair?

If a large meniscal repair is carried out then the knee is usually protected in a brace for six weeks following surgery.

Initially the knee is placed in a brace that keeps the leg fully straight. At approximately 10 days following the surgery the knee will be changed into a hinged knee brace. This brace allows the knee to bend in a controlled fashion from 0° to 90°.

The brace has two small locks at the side which allow you to lock the brace out straight when walking and unlock the brace to allow the knee to bend it up to 90° when sitting or lying down. This protects the meniscus repair but allows some movement to stop the knee joint getting stiff. 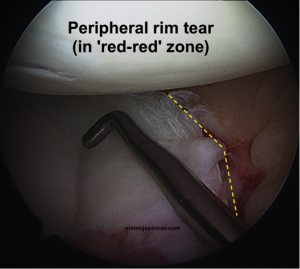 Weight-bearing is normally allowed on the leg within the knee brace locked out straight. Crutches will be required for the six weeks that brace is on.

After six weeks the brace will be removed and you will be required to work on strengthening the thigh muscles and range of motion exercises.

You should avoid squatting down under load beyond 90° for a further six weeks.

When can I drive following my knee surgery?

Following this there is no set time frame for getting back to driving following surgery. You must be able to demonstrate that you are safe to drive, (i.e. can carry out an ‘emergency stop’ and handle the vehicle safely at all times). This will vary on an individual basis.

When can I return to sport following my meniscal repair?

The speed of return to sport following knee surgery varies between individuals and the level of sport you compete at. This can be discussed with you prior to your surgery.

The hinged knee brace is set with a range from 0° to 90°. The brace can be locked out in full extension (0°) when the patient is mobilising. Crutches will be required. It is safe and beneficial to load the meniscus with the knee fully extended following surgery and therefore weight-bearing as tolerated with the brace locked out in extension is allowed.

When the patient is sitting or lying down then the brace can be unlocked and the knee encouraged to bend to 90°. Aiming to maintain a degree of motion within the knee joint.

The brace should really only be removed for showering or having a bath. It’s important to avoid loading a flexed knee when getting in out of the shower or bath. The brace should be reapplied as soon as possible after such activities.

The patient will usually come out of the brace at six weeks following surgery at which point physiotherapy will often be required to work on range of motion and strengthening exercises.

In order to try to protect their meniscal repair the patient is encouraged to avoid squatting down under load beyond 90° for at least a further six weeks following removal of the brace. It is however safe to gently work on regaining full flexion when supine or sitting.